The United States has the dubious distinction of having a higher percentage of its population incarcerated in some manner than any other country (possibly save one) on the planet.  Almost 8 percent of the population is too dysfunctional to be allowed to roam the streets freely.  I know, I know, I’ve heard the criticisms:  We over-sentence people to prison with stupid things like “three strikes and you’re out” laws.  Prison should be for seriously violent offenders only – all the rest should be in rehabilitation programs.  A lot of the folks in prison are really suffering from addiction or mental disorders and can and should be getting treatment instead of punishment.  Prison is where you go if you’re poor and disadvantaged, while the rich get away with murder.  I’ve heard it all.  And I know that there’s a lot of truth in the criticisms.  But I’ve also seen with my own eyes the stark realities of prison life and also have years of experience working in a wide variety of settings (including treatment centers) whose clientele – despite every reasonable effort made on their behalf – eventually became inmates.  So I know that despite the legitimacy of some of the criticisms mentioned above, the reality of the situation is much more sobering.  Our country, among others, is drowning in a sea of character disturbance.  And not only do we seem oblivious to the root causes of the problem but we also persist in addressing it in ways that are definitely not working.

Misconceptions abound about why people commit serious crimes and eventually find their way into prison.  Some of the misconceptions have been around a long time and persist despite mounds of contrary evidence.  I attended a seminar just recently at which a presenter reiterated beliefs I’ve heard many times before – beliefs that eventually propelled her into a “ministry” of sorts to the prison population that she carries out in her retirement.  The formal introduction she gives to the inmates who regularly attend the program she’s fashioned for them reflects these beliefs (and I quote as accurately as my memory serves):  “I know you were abused and neglected.  I know you were unloved.  I know you were disadvantaged and disenfranchised.  I know how victimized you were by poverty and injustice, ” etc. (The presenter actually used the words: ‘I know you were the real victim’ when talking to a group of prisoners given life sentences for violent assaults and murder).  And I know how disrespected you feel being labeled psychopaths, sociopaths, and antisocial personalities and written off by society.  But I also know that if you hadn’t suffered in so many ways, you wouldn’t be in this awful place today.”  The presenter held these beliefs with unwavering conviction, just as she held the firm belief that all that was necessary for the inmates’ healing and restoration was, as she put it, “compassion.” I must tell you that there’s a big part of me that wishes beyond measure that this woman is right.  It would be great if these folks were simply “wounded and broken” and enough compassion could truly heal them. But sadly, she isn’t right.  And because she isn’t, the challenge we face in dealing with the seriously character impaired among us is much more daunting (I have much more to say on dangerous misconceptions about why people do bad things in my books In Sheep’s Clothing, Character Disturbance, and The Judas Syndrome).

The tragedy plaguing our country and so many other free societies is that the prevailing cultural climate has fostered so much character disturbance that almost one in ten among us simply can’t be trusted to function without close supervision or confinement.  No society can be expected to function very well in those kinds of circumstances.  To add insult to injury, what we do with that “captive audience” once we have them confined goes against everything we know about how to assist folks in developing the skills, habits, or motivation necessary to be a well-disciplined, contributing member of society (unfortunately, there will always be some who are so disturbed and incorrigible that they can never see the light of day).  While we know how to confront and correct problematic thinking patterns and behavioral habits and in many cases have years to employ the strategies, we mostly choose to merely “warehouse” (while also providing necessities, food, educational opportunity, healthcare, etc.) the severely dysfunctional among us at an annual price tag per inmate equivalent to an upper-middle class income.

We need to completely revolutionize our approach to dealing with the seriously character disturbed.  But our situation is probably going to have to get a lot worse before we decide to make it better.  Right now, many states are taxing their already tight budgets to the limit in order to build even more prisons and provide more bed space in other restrictive environments.  Local jails and other institutions are bursting at the seams and some very dangerous folks remain on the streets because of overcrowding.  Ultimately, however, our only salvation will lie not in imposing harsher penalties on those whose character has become severely impaired but in affirming character-fostering values and traditions that can prevent such serious character development failures and in daring to confront directly the beliefs, attitudes (especially attitudes of entitlement), ways of thinking (especially narcissistic, egocentric thinking), and behaviors (especially manipulative, exploitative, dishonest, and responsibility-avoidant behaviors) that erode both character and culture.

This week the Canadian people were given a stark reminder of just how dangerous the world can be when even one person embraces a twisted belief.  You can find more on this topic in several other articles on this and other blogs, including the articles:  Radical Ideologies: Deadly Ways of Thinking and A Peek Inside the Mindset of Terror.  I’ll also have more to say about recent events as well as the problem of serious character disturbance on Character Matters this Sunday evening.

ANNOUNCEMENT:  Just got the cover art for the new Japanese edition of In Sheep’s Clothing, so I thought I’d share.  New Russian and Korean editions are also scheduled for release soon and I’ll post updates when the covers become available. 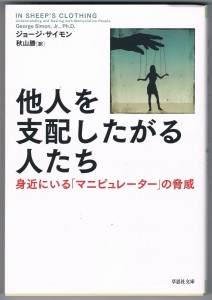 9 thoughts on “Prisons: What To Do with the Seriously Character Disturbed?”