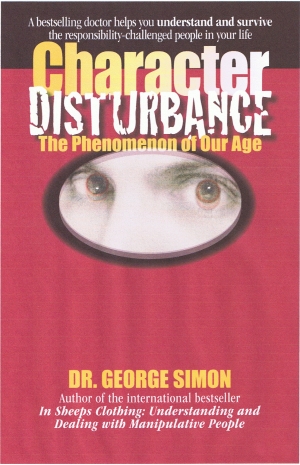 My latest book defines Character Disturbance as the “phenomenon of our age.”  Many free societies have developed cultures of permissiveness and entitlement prompting far too many persons to enter adulthood not adequately socialized and evidencing profound deficiencies of character, sometimes well past their mid-life years.  This poses a real challenge for the various disciplines within the mental health field.

For many years, the dominant orientation to helping people overcome their psychological and emotional problems was a variant of psychodynamic or “traditional” psychology.  This orientation had its birth in a very repressive era in which some individuals suffered so much unwarranted shame and guilt that they developed bizarre symptoms that haven’t been seen for many years now.  But to explain these maladies, theories were developed about what makes people tick on an emotional and psychological level and theories of neurosis were born.  The problem is that for all too long, paradigms based on the theory of neurosis were thought to adequately account for the psychological functioning of everyone.  That is, traditional psychology conceptualized everyone – at least to some degree – as neurotic.  It was a perspective appropriate for the age of neurosis, but not for the age of character disturbance.

In the September 24th post, Another Day in It’s All About Me Hell, I presented a case about a self-indulgent woman who knowingly and dishonestly made a commitment to one man while cheating on him with another, and whose only concern was how to get the memory of great excitement associated with the affair out of her mind.  Several comments poured in about the article, some of which were posted.  Some comments from the readership indicate just how much sway traditional paradigms still hold and how they predispose us to think about people and their psychological functioning in certain ways.  The problem is, some of these preconceptions put us at a great disadvantage when it comes to understanding or dealing with character-deficient individuals.  One commenter opined that the woman must certainly be “unaware” of the destructive and self-indulgent things she was doing and that a less confrontational and more accepting approach would be essential to inviting her into a therapeutic process that would eventually help her “see” the error of her ways.  But as I have pointed out in numerous workshops (sometimes with live examples) disturbed characters “already see, they just disagree” with the principles they know society wants them to adopt.  The woman in the story just happens to have participated in many counseling venues over many years with many counselors, albeit not for any significant amount of time in any of the encounters.  And the behavior described in the article is just one example of an all too familiar pattern of similar behaviors she’s exhibited over the years.  Moreover, she’s been told the same things by many friends, family members, professionals, etc., so many times that’s is not possible she doesn’t know the issues.  She knows them like the back of her hand, but she’s still at war with them.  And no amount of geniality in approach will make her ready to consider changing course, and many approaches will only potentially enable her.  See’s simply not yet ready to change.  It’s also very interesting to note that most persons (lay persons and mental health professionals alike) tend to view a male with this woman’s set of attitudes, behavior patterns, etc. in a very different light.

I can’t over-emphasize how much our preconceptions matter in understanding the phenomenon of our age. In my new book I give an example of a school bully called out by a hall monitor when spotted knocking someone’s school books to the floor, who, when confronted, only displayed a face suggesting innocence and begged the hall monitor to explain why she singled him out.  In short, he denies wrongdoing.  But is he “in denial?”  That is, is he truly unaware of what he just did or the harm he caused?  That depends.  If he’s suffering from some significant neurosis, maybe.  But if he’s disturbed in character, he’s probably just using the tactic of “feigning innocence” (which is among the many tactics I define in both In Sheep’s Clothing and Character Disturbance) to get out of a potential detention hall.  In other words, he’s fully aware of what he did, and what punishment he might have coming, and he’s willing to try the gambit of appealing to the hall monitor’s conscientiousness (and possibly her alignment with traditional psychological thinking) to convince her he had no conscious malevolent intent.

In order to really understand and deal with character disturbance, we have to move past preconceptions about human nature and psychological function that are no longer appropriate for our times.  I’m not saying that neurosis doesn’t still exist and that traditional perspectives have no value.  Fortunately for society, neurosis does still exist, but rarely to the extreme degree that it causes the kinds of symptoms Freud and his followers observed.  Today’s neurotics are, for the most part, quite functional, and form the backbone of society.  But there are many more persons today with varying degrees of character disturbance, and understanding and dealing with them requires an entirely different perspective.  In Character Disturbance, I make a far more in-depth comparison between neurosis and character disturbance than I’ve ever outlined before, to make the point about just how different our perspective must be when it comes to dealing with the responsibility-challenged.  Five of the major differences between these two groups of folks are outlined in articles I posted on this site in August and September of 2008 and can be found in the archives section of this blog.  In the coming weeks, I’ll be presenting an updated series of posts on the critical differences between those persons best describes as neurotic vs. character disturbed.